Since the end of the Cold War in the early 1990s, the United States has been the leading global superpower with a vast military stationed around the world and an extensive economic and cultural reach. Yet, two debt-inducing wars in Afghanistan and Iraq, the 2008 global recession, outside governments’ possible tampering with the nation’s 2016 election, and this year’s coronavirus pandemic have left the United States arguably more vulnerable than at any time in the post-World War II period. This year’s election in the United States is not happening in a vacuum but instead at a time when the world faces uncertainty around the issues of climate change, economic and racial disparity and our global response to diseases. As such this 2020 US election for the White House between Donald J. Trump and Joseph Biden has been called by many the most important election in this generation. At stake, some say, is the future of the country.  Others point to America’s international standing and believe that this election will be the bellwether moment for humanity in the early 21st century.

Aiming to critique and understand the upcoming election and how politics work in Washington, on October 14, David Dumke, director of the University of Central Florida’s Office of Global Perspectives & International Initiatives hosted with U.S. Ambassador a Lester N. Mandell Endowed distinguished Lecture Series titled “Politics and Governance: How Washington Works and Doesn’t Work.” The event was moderated by Mathew Peddie, a National Public Radio – WMFE-FM’s news commentator. Two leading U.S. political consultants, Andrew Card and Peter Rouse, were the featured speakers of the event. Card, a Republican, was the Secretary of Transportation under George H. W. Bush, and the White House chief of staff in the presidency of George W. Bush. Rouse, a Democrat, served as counselor to the president and White House chief of staff in Barack Obama’s administration.

Card explained that he is not a Donald Trump supporter. Yet, he acknowledged that Trump’s greatest asset was the president’s ability to communicate and to market his ideas. Said Card, “He (Trump) is able to get the stage, keep the stage, and prevent others from standing on it. So he dominates the conversation and almost no one can talk about politics without talking about Donald Trump.”

The demographic that Trump has captured and continues to represent, stated Card, is a group of Americans who feel they are being left behind. While he is the nominee of the Republican party, Trump is the champion of this disenfranchised group. And as a representative of this swath of American voters, the president has changed the Republican party into “the Trump party… So, his biggest asset is that he has a larger than life personality and it dominates every aspect of his leadership.”

Card, who is a resident of New Hampshire and represented Massachusetts in the U.S. Congress before serving in successive Republican administrations, went on to explain that Trump has changed the nature of democracy in the United States—not always been for the better. Trump is an “immediate gratification expert” who often spreads his opinions in a haphazard manner via social media. Card reminded listeners that the greatest threat to democracy is mob rule and that Trump has, “brought the mob inside the rule because he is a digital communicator in such a way that he does not go through representatives.”

Liabilities of the Candidates: For Trump, Himself, For Biden Complacency

Rouse, the first and only Asian American chief of staff of the senate offices, stated that Trump has changed traditional party politics and pointed to the import of Florida in the upcoming election. Said Rouse, “Florida is at the epicenter of the fight for the Electoral College which at the moment is really the battle for the White House.”

Rouse believes that the President is running at a time when the public discourse is a referendum on his own presidency. What would be better, explained Rouse, is if Trump could reframe the election instead as a choice between himself and Biden. Rouse acknowledged that Trump is trying to do this reframing by casting Biden as a socialist or a captive of the leftwing of the Democratic Party. Further, Rouse stated that President Trump does not appear to be running for the moderate center of the voting populace and is focusing instead on his rightwing base. The thought on the Trump team, Rouse said, is that a latent ground swell of voters will rise up and push Trump to victory. This latent group are presently not expressing their overt support for a second Trump term.

Biden seems to be doing the opposite of Trump, that is aggressively trying to win the moderate center such as suburbanites, independents and working class voters. All of these groups were part of the coalition that gave Barack Obama victories in 2008 and 2012 and Trump victory in 2016. Much to the chagrin of the American leftwing, Biden appears to not be running to court their vote.

The biggest problem Biden could face is a complacency regarding the election. In the run up to the 2016 election, Rouse reminded the audience,  Hillary Clinton appeared confident in her upcoming victory as almost every poll taken before the election showed her comfortably ahead of Trump. Yet, four years ago Trump prevailed. The same could happen, stated Rouse, to Biden if the former vice-president is not careful.

Ultimately Rouse sees a way for the Trump campaign to win. In this scenario, Biden may get an even higher popular vote majority than Clinton won in 2016 by running up vote numbers in traditionally democratic states. However, Trump may win more of the battleground states with his hoped for “latent vote.” Essentially the 2020 election would be a repeat of the 2016 election where Trump holds the White House not with a popular vote victory but an Electoral College victory.

Running on the Rug, not the Fringe

Biden, said Card, needs to show voters that he is not controlled by the far left. Card explained this theory as, “standing on the rug (center) of American politics, not the fringe.” Card stated that when he was growing up the center of American politics was broader but now there are more left and right fringe elements controlling the U.S. political process. Nonetheless, it is challenging to govern the country without the necessary bravery to find the middle ground between all people. Biden could still lose the election because parts of the voting populace, though disliking Trump, are still fiscally conservative, America first in focus, and keen to grow the economy all the while wanting to keep taxes low.

Card was in agreement with Rouse regarding the framing of the political discourse around the election. If the election is about Donald Trump as a person, Card believes that Trump will lose. However, if the election is about the positives of the U.S. economy up until the coronavirus pandemic, then Trump will look like a good choice to voters. Card stressed that the fundamental problem for Trump is that COVID-19 highlighted some of his weak personality traits to the American public. In the upcoming election, given the trouble Trump appears to be in due to the polling numbers, Card predicted that Trump will not be able to win the popular vote but may win the Electoral College which would result in another contentious election.

Moderator Peddie turned from the election to a broader question on leadership in the time of national and international crisis, asking Card about President George W. Bush’s response on the day of the 9/11 attacks and Rouse on President Obama’s response to the global recession in 2008 and 2009.

Card related the story of the 9/11 attacks and his iconic picture whispering to President Bush that the United States was under attack while Bush read to school children. Rouse discussed the approach taken by Obama and his economic team in confronting the worst economic downturn in U.S. history since the Great Depression of 1929.

While Card agreed with Rouse that the seminal decision of this election will hinge on what voters think of Trump’s personality, Card stressed that Trump has a natural ability to involve and mobilize people into voting for him that hereto had been non-voters and not active in the political process. As a case in point, Card reported that despite Trump’s losing Card’s home state of New Hampshire in 2016, Trump seems now to be quite popular with a more active base than Biden, “I see more Trump signs than I do Biden signs in the communities around where I live… and I don’t live in the most conservative part of the state.”

Partisanship and the Transitions of Power

Card felt that one of the major contributors to escalating partisanship in the United States is the advent of the digital age and what Card called instant gratification in politics. Highlighting poor journalistic standards in both writing and news reporting, Card recalled a time when there was thorough fact-checking in the news business and a moderated approach to information gathering that depended on grounded sources and strong editorship. Card said, “Today with instantaneous communication people put their thoughts out as if it is newsworthy. There is very little discipline in the media. Journalists are now encouraged to have an online following, which means they write with more adjectives and adverbs.” Pining for a time when journalists used strong verbs and nouns and were impartial conveyors of the news, Card decried the present need for journalists to have fans just to be relevant in the field. The result of online followings, Card said, is that they create silos and the reinforcement of biases among the public.

Rouse emphasized the need for a peaceful transition of power regardless of who wins the upcoming election. Trump has made statements that if he does not win, the election itself is rigged. Rouse stated that he was not sure how much the president’s allegations of a fixed election are meant to enflame his base. Nonetheless, he hoped that Trump would follow the rule of law after the election. Stated Rouse, “one of the hallmarks of our democracy is the peaceful transition of power.”

Both Rouse and Card agreed that they were hopeful for the future of the United States following this 2020 election. Said Card, “It is very important for people to get out and vote.” 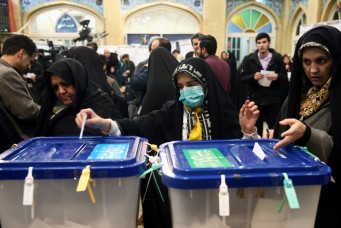