The Rise and Fall of the House of Bo: How a Murder Exposed the Cracks in China’s Leadership. By John Garnaut. Penguin Books, 2012. Kindle edition.

All eyes are on China. Yet, for all the attention the media, politicians, and scholars are paying it, we know precious little about the inner workings of the Chinese Communist Party. Synonymous with the state, the party presents a unified face to the world. It appears to be a well-oiled, centralized machine. Thirty years of openness to the world, four U.S.-China Strategic and Economic Dialogues, and hundreds of official press conferences have shed little light on the country’s elite.

In 2012, a crack opened in this façade. The greatest crisis the party has faced since the Tiananmen Square protests of 1989 burst into the open in Chongqing, a southwestern direct-controlled municipality the size of Austria and inhabited by more than 28 million souls.

On February 2 of that year, Chongqing police chief Wang Lijun was mysteriously demoted to a position overseeing science, education, and the environment. Four days later, Wang drove himself to the American consulate in Chengdu, 200 miles to the northwest of Chongqing, and made a plea for asylum. So began the undoing of Bo Xilai, a member of China’s central politburo and the debonair Chongqing party secretary whom Henry Kissinger had praised just months earlier as “China’s future.”

As the sordid details unfolded from last spring to early autumn, a tale of opulence and revenge emerged that directly contradicted the vision of a unified Chinese party-state. In Chengdu, Wang revealed a story of murder. (After Chinese security police surrounded the consulate, Wang emerged and was immediately arrested.) In 2011, Gu Kailai, Bo’s troubled wife, had lured the family’s British fixer, Neil Heywood, to Chongqing for a special visit. Heywood is credited with getting the Bo’s son, Bo Guagua, into Harrow and Oxford. Gu later would claim that Heywood had threatened her son, and that she had no choice but to do everything in her power to stop him. On November 13, 2011, she poured cyanide down Heywood’s throat at the Lucky Holiday Hotel; his body was found two days later.

The real motive was impossible to discern from Gu’s show trial in August 2012. The court apparently was shown an e-mail from Heywood vowing to “destroy” Bo Guagua if he could not deliver millions of pounds; it is unclear if this e-mail was real. But as a member of China’s “red aristocracy” by both birth and marriage, Gu likely acted on what she believed was her “divine right,” according to an interview with an anonymous Chinese financier in Jamil Anderlini’s The Bo Xilai Scandal: Power, Death, and Politics in China. Gu’s father was a general in the 1979 war with Vietnam; her husband was the son of Bo Yibo, one of the Eight Immortals who held power in the wake of Mao’s death. This family was destined to rule. And the law should have broken down before it reached them—and it would have, if not for Wang Lijun.

Anderlini, the Beijing bureau chief for the Financial Times, looks at Heywood’s path from his grooming in London and arrival in China to seek his fortunes, to his life as a moderately successful businessman enmeshed with the Bo clan. Patronage brought him a comfortable existence in Beijing, where he lived with his wife and two children. Fluent in Mandarin and adept at navigating the maze of personal relationships that hold together China’s political elite, Heywood zipped around Beijing in a Jaguar with the license plate N007W3. When his name became a censored search result on Weibo, China’s answer to Twitter, netizens simply referred to him as “007.” In the halls of Chinese government, Heywood is rumored to have been a spy for MI6.

The Rise and Fall of the House of Bo depicts the “global aristocracy” that includes the likes of Heywood and Bo. John Garnaut, China correspondent for the Sydney Morning Herald, describes a network through which Bo Guagua could invite U.S. Ambassador John Huntsman’s daughter to be entertained in Beijing. Within this network, the Bo family embraced British upper class culture, while Western politicians and businessmen, charmed by Bo Xilai’s fluid English and winning smile, looked for ways to capitalize on China’s rise. Few seemed to suspect the dark drama beneath Bo’s shining city of Chongqing.

From his arrival in 2007, Bo made a great show of “cleaning up” Chongqing. To an outsider, his “smash black” campaign against organized crime was a great success. In truth, Bo and his right-hand man, Wang Lijun, were only cracking down on those criminal elements that blocked Bo from tightening his grip on the city. “Bo controlled the mafia by making it his own,” writes Garnaut. Only a select few gangsters stayed in place: notably the “Godfather of Chongqing,” Weng Zhenjie, who was just too connected to the military for Bo to take on.

Beijing was wary of Bo. He behaved too much like a Western politician. Shaking hands, grinning for the cameras, and showing off do not make up the behavior of the typical wooden-faced cadre. Add to that Bo’s “red song” campaign and Maoist rhetoric and former premier Jiang Zemin’s decades-long patronage, and no wonder Beijing was wary. “People inside the party always compared him to Hitler,” one Chongqing official told Anderlini. Yet, if not for Heywood’s murder and Wang’s flight, Bo could have been promoted to the Politburo Standing Committee—from which, many thought, he would jockey with Xi Jinping to become China’s top leader.

The Chinese Communist Party’s stability is threatened by two weak points. The first, more obvious one, is the compact made with the public after the Tiananmen massacre in 1989: the party-state brings you prosperity and you accept the party-state. Economic decline and social pressure threaten this bargain. The other weak point is just barely illuminated by the Bo Xilai scandal: far from a united front, the party is driven by egos, feuds, and factionalism. These two authors provide a rare and useful glimpse into this fractious world.  Anderlini gives insight into Heywood’s voyage while focusing on Bo’s Jekyll-and-Hyde switches; a populist by day, a tyrant by night. Garnaut looks more carefully at the family ties that brought Bo Xilai to power but pitted him against Xi and others. He exposes the mafia-like operations of all party clans, with feuds rooted deep in the past and embittered by the Cultural Revolution.

Gu and Wang have stood trial and received their sentences; Bo was finally “transferred to judicial organs” in early January, where he is most likely languishing under shuanggui, or “double designation,” a special form of punishment reserved for cadres who violate party discipline. His ruthlessness in Chongqing is now condemned by officials and the state media. Yet Bo Xilai, though the most visible example, is by no means the only Chinese politician bending the law to advance his own agenda.

Anne Henochowicz is the translation coordinator at China Digital Times, a bilingual media non-profit, where she writes “Drawing the News,” a biweekly political cartoon round-up. She has contributed to the China Beat blog and Foreign Policy. On Twitter: @murasakint. 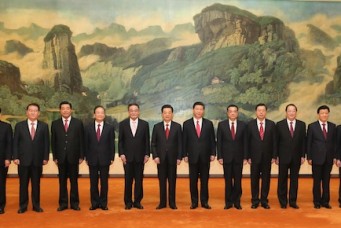 Rule of the Princelings