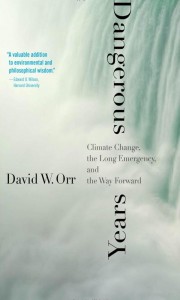 Though not trained as one, David W. Orr, a distinguished environmentalist and scholar, would have made an effective prosecutor. His latest book is a powerful indictment of mankind’s collective failure to build the institutions and mindset needed to deal with catastrophic climate change. All of the villains—money in politics, rampant consumerism, and an obsessive focus on the here and now—are present. And while they have been the subject of other books and articles, Dangerous Years: Climate Change, the Long Emergency, and the Way Forward is a thoughtful collection of work on what man owes to nature, how we ignore that debt to the detriment of ourselves and our posterity, and the monumental steps necessary for a course correction.

Dangerous Years illustrates the split in the environmental movement. One side sees mankind’s salvation in reforming capitalism in order to transition away from fossil fuels to low- and zero-carbon energy sources. Most who identify with this camp prefer some kind of market mechanism to kick-start that transition. There’s the economy-wide carbon tax, which exists in Ireland and parts of Canada. And there’s the cap-and-trade program, putting limits on emissions and allowing emitters to buy and sell allowances to stay within them, in place in California and the European Union and soon to be utilized in China. In the main, they believe that these measures, which will incentivize investments in renewables, will be sufficient to “green” the status quo and avert a catastrophic temperature increase in the twenty-first century.

Orr is a proponent of a more radical approach, which sees such reform measures as tantamount to putting a band-aid on a bullet wound. Far from advocating a course correction for capitalism, supporters of this approach envision fundamental reform of our economics, our governments, and our own psychological approach to our relationship to nature. Our political economy privileges corporations over people, ourselves over our posterity, and economic growth over anything else. Relying on a technological miracle to solve climate change without fixing the system that created the crisis in the first place would be, in Orr’s estimation, a fool’s errand. In what could serve as an epigraph for the entire book, Orr writes, it is still easier “for us to envision the end of the world than the end of capitalism.”

Dangerous Years suffers from a paradox that Orr cannot seem to resolve. Many of his desired changes would take generations to fully realize, time the planet literally does not have. A lot of what Orr wants to happen will need to occur at the grassroots. It is up to communities to succeed where government has failed. In particular, the system of higher education, which is designed to equip youth with the skills they need for the future, appears to be singularly incapable of doing so when it comes to an appreciation for the natural world, and a working knowledge of how the planet works as a physical system. There is a lot of environmental and climate activism on American college campuses, but those movements arise out of a spirit of dissent and protest, rather than being initiated and supported by college administrations themselves. As a result, they exist as a fringe special interest, instead of a central part of the college experience that can instill values and beliefs which will last a lifetime.

It is less clear what Orr wants us to do now that will have an immediate and large impact on our upward trajectory of greenhouse gas emissions. It is not until Orr is well into the book that he introduces some case studies from his own experience in changing systems in Ohio. His look at Chattanooga, Tennessee and his own academic home, Oberlin College, outlines some changes that individual institutions can make now: urban planning that sees a city as a living organism, requiring a strong circulatory system (read mass transportation infrastructure); and a campus where all decisions follow from a philosophy of sustainability, including deployment of renewable energy, efficiency policies, and a curriculum that prioritizes understanding of natural systems. Whether we have the foresight to apply those changes universally remains to be seen. A great environmental awakening is clearly necessary, but one gets no clear sense from Orr what the spark to ignite that awakening would be.

Orr’s analytical rigor also fails him in his argument that U.S. militarism, with its “manufactured” threats hyped by a “supply chain of violence,” is a direct impediment to our ability to effectively fight climate change. While very few could credibly argue that the Department of Defense always spends taxpayer money responsibly, or that the 2003 invasion of Iraq was not a strategic folly, the connections between these two facts and climate change is less clear. Canada and Australia, to take two examples, are by many measures far less militaristic and violent societies than the United States is, and they were both led by governments that were hostile toward action against climate change.

Indeed, the same military-industrial complex that Orr derides—calling it an unaccountable secret government—is quietly celebrated in his footnotes as a source for valuable research on the social impacts of climate change, particularly how those impacts affect international peace and security. The foreign policy elite he derides produced the analysis he uses to justifiably call attention to the emergency nature of the situation we find ourselves in.

The outcome of the U.S. presidential election significantly changes the context for Orr’s arguments. Much of his agenda would be difficult to achieve under a President Hillary Clinton, whom he would regard as an incrementalist; it seems downright impossible under President Donald Trump. Judging by his public statements expressing his rejection of climate change science, as well as the backgrounds of those in his White House inner circle and cabinet, the evidence suggests his administration may undermine every significant environmental regulation put in place in the past fifty years, regardless of the cost imposed on society. American politics is likely to get a lot coarser, with a chief executive disinclined to identify with any of the virtues Orr says are necessary to navigate the potentially dark future ahead. A “long emergency” indeed. 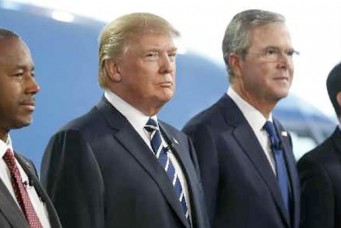