March 6, 2011: In the southern town of Daraa, police arrest some fifteen young boys for spray-painting buildings with the slogan, “The people want the downfall of the regime.”

March 15, 2011: On Day of Rage, small protests against the regime of President Bashar Al-Assad (1965-) take place in Damascus and Aleppo.

March 29, 2011: Large pro-regime demonstrations are held in Damascus and elsewhere in Syria.

April 6, 2011: Bashar Al-Assad announces the granting of Syrian citizenship to tens of thousands of Kurds.

April 16, 2011: In a televised address, Bashar Al-Assad announces the repeal of emergency law and the granting of permission to hold demonstrations under certain conditions.

June 6, 2011: Syrian government reports that more than 120 soldiers were killed by “armed gangs” in Jisr Al-Shughour; some Western media reports suggest that residents took up arms to repel assault by regime security forces.

June 17, 2011: Syrian conflict spreads to Lebanon with the outbreak of clashes in Tripoli between Lebanese supporters and opponents of the Syrian regime.

July 8, 2011: Tens of thousands of Syrians, many carrying roses and olive branches, stage a demonstration in Hama.

July 11, 2011: Secretary of State Hillary Clinton says that Bashar Al-Assad has “lost legitimacy” and that “we have absolutely nothing invested in him remaining in power.”

July 29, 2011: Defectors from the Syrian army announce the formation of the Free Syrian Army, led by former Colonel Riad Al-Asaad (1961-).

August 3, 2011: UN Security Council issues a statement condemning “the widespread violations of human rights and the use of force against civilians by the Syrian authorities.”

August 23, 2011: Syrian factions inside and outside of Syria form the Syrian National Council to oppose the Al-Assad regime.

September 27, 2011: Security forces and military defectors engage in heavy fighting in the city of Rastan.

October 29, 2011: Security forces shell Homs after clashes between Al-Assad loyalists and military defectors in the city.

November 2, 2011: Arab League announces that the Syrian government has accepted an Arab League proposal to immediately halt violence, free prisoners and open dialogue with the opposition.

December 7, 2011: Bashar Al-Assad tells ABC News: “I did my best to protect the people, so I cannot feel guilty.”

December 12, 2011: UN High Commissioner for Human Rights Navi Pillay says more than 5,000 people have been killed in the Syrian conflict.

December 23, 2011: Two suicide bombings kill at least forty people outside the State Security Directorate and another security building in Damascus.

January 22, 2012: Arab League calls on Bashar Al-Assad to hand over power to his top deputy, and for the formation of a national unity government and new Syrian elections.

February 4, 2012: Russia and China veto draft UN Security Council resolution supporting Arab League call for Bashar Al-Assad to resign and demanding all parties cease violence and reprisals; Secretary of State Hillary Clinton criticizes the veto as a “travesty” and calls for “friends of democratic Syria” to unite against Al-Assad.

February 12, 2012: Arab League approves a resolution opening communication channels with the Syrian opposition and calling on the UN Security Council to send a peacekeeping mission to Syria; Al-Qaeda leader Ayman Al-Zawahiri issues a videotaped message calling on militants throughout the region to participate in the overthrow of the Al-Assad regime.

February 23, 2012: Former UN Secretary-General Kofi Annan is appointed Joint Special Envoy of the United Nations and the Arab League on the Syrian crisis.

February 24, 2012: Friends of Syria conference in Tunis demands that Bashar Al-Assad cease the use of violence and allow humanitarian aid into the country, and calls on the UN to send a peacekeeping mission to Syria.

February 26, 2012: In a national referendum Syrian voters approve a new constitution that establishes a multi-party system; opposition leaders call the vote a sham.

May 7, 2012: Syria holds parliamentary elections amid boycott by opposition; reports say that ruling Baath Party and allies won a 60 percent majority, with most of the other seats going to pro-regime independents.

May 10, 2012: Suicide bomb attacks kill more than fifty people near a police base in Damascus.

May 25, 2012: Security forces and pro-regime irregulars known as shabiha reportedly kill more than 100, half of them children, in the town of Houla.

June 30, 2012: Action Group for Syria, comprised of the six members of the UN Security Council, European Union, Turkey, Iraq, Qatar and Kuwait, meets in the Geneva I conference; Geneva Communiqué calls for implementation of the Annan peace plan.

July 6, 2012: UN Secretary-General Ban Ki-moon says that the Syrian conflict has reached a “critical stage” and warns that it could be devastating for the entire region; Brigadier General Manaf Tlass, a member of Bashar Al-Assad’s inner circle and son of former Defense Minister Mustafa Tlass, defects to Turkey.

July 14, 2012: International Committee of the Red Cross classifies the Syrian conflict as a civil war.

August 15, 2012: A report by the UN Independent International Commission of Inquiry on the Syrian Arab Republic says that regime as well as opposition forces have committed crimes against humanity.

August 26, 2012: Security forces reportedly kill some 400 people in the Damascus suburb of Dariya.

September 25, 2012: Sixteenth-century market in Aleppo is destroyed amid heavy fighting in the city.

November 11, 2012: Syrian National Council and other factions form the National Coalition for Syrian Revolutionary and Opposition Forces; Moaz Al-Khatib (1960-), a Muslim cleric, is named coalition president; the coalition’s goals include overthrowing the Al-Assad regime and establishing a “democratic and pluralistic civil state”; Israeli tanks open fire on Syrian posts after shelling of the demilitarized zone in the Golan Heights.

November 30, 2012: Friends of Syria conference in Tokyo calls on Syrian regime to cease the use of violence and provide access for humanitarian aid.

January 6, 2013: In a televised address, Bashar Al-Assad announces reforms to end the conflict, including elections, a national reconciliation conference and a new constitution.

January 29, 2013: Syrian Observatory for Human Rights reports that the bound bodies of sixty-five people, apparent victims of a mass execution, were found on a riverbank in Aleppo.

February 28, 2013: At Friends of Syria meeting in Rome, United States pledges $60 million in medical supplies and food for rebels; Syrian National Coalition expresses disappointment over the lack of military aid.

March 7, 2013: United Nations High Commissioner for Refugees António Guterres reports that more than one million Syrians have become refugees from the conflict.

March 24, 2013: Moaz Al-Khatib resigns as president of the Syrian National Coalition; he later cites interference from international and regional parties.

April 21, 2013: At Friends of Syria meeting in Istanbul, United States pledges an additional $123 million in non-lethal aid to the Syrian opposition.

April 30, 2013: Lebanese Hezbollah leader Hassan Nasrallah says in a televised speech that his group’s fighters have intervened in Syria in support of the Al-Assad regime.

May 4, 2013: Security forces and shabiha reportedly kill some 250 people in Baniyas and Bayda, triggering an exodus from the cities.

May 5, 2013: Israel says its military aircraft bombed a shipment of advanced surface-to-surface missiles in Damascus possibly intended for Hezbollah.

May 7, 2013: UN Office for the Coordination of Humanitarian Affairs says that 4.25 million Syrians have become internally displaced persons (IDPs).

May 11, 2013: Two car bombings kill more than forty people in the Turkish town of Reyhanli near the Syrian border.

May 22, 2013: Friends of Syria conference in Amman condemns atrocities by Syrian regime and reiterates support for the Syrian National Coalition; clashes in Tripoli in Tripoli kill at least ten people.

June 7, 2013: UN increases the target in its appeal for international aid to Syria from $3 billion to $5 billion, citing the rapid intensification of the conflict.

June 13, 2013: White House announces that U.S. intelligence officials have “high confidence” that the Syrian regime used chemical weapons multiple times over the past year, and that as a result of the finding President Obama authorizes direct military support to the rebels.

June 22, 2013: Friends of Syria conference in Doha agrees to provide “material and equipment” to rebels, and demands fighters from Hezbollah, Iran and Iraq withdraw from the country.

July 6, 2013: Ahmad Jarba (1969-), a former political prisoner, is elected to replace George Sabra as president of the Syrian National Coalition.

July 26, 2013: Syrian National Coalition delegation, meeting with members of the UN Security Council, seeks a commitment that Bashar Al-Assad will not be part of a transitional government; calls on Russia to end its support for Syrian regime.

August 27, 2013: Defense Secretary Chuck Hagel says that the United States is prepared to strike Syria if President Obama orders an attack to deter Bashar Al-Assad from further use of chemical weapons.

August 30, 2013: White House accuses Syrian regime of launching a chemical attack that killed 1,429 people in the Damascus suburbs on August 21; U.S. assessment says motive was to rid suburbs of opposition forces using area to stage attacks on capital; Doctors Without Borders later reports that three hospitals near Damascus treated 3,600 patients displaying neurotoxic symptoms, and that 355 of the patients were subsequently pronounced dead.

August 31, 2013: President Obama asks Congress to authorize a U.S. military strike on Syrian regime targets in response to its use of chemical weapons.

September 4, 2013: Russian President Vladimir Putin warns against a U.S. strike on Syria, saying: “We have our ideas about what we will do and how we will do it in case the situation develops toward the use of force or otherwise.”

September 5, 2013: At the G-20 summit in St. Petersburg, UN Secretary-General Ban Ki-moon says that aid efforts are not keeping pace with the growing humanitarian crisis in Syria.

September 10, 2013: President Obama announces that he has asked Congress to postpone a vote to authorize the use of force against Syria while a diplomatic approach is pursued.

September 14, 2013: Russia and the United States agree on a deal to place Syria’s chemical arsenal under international control, and to complete destruction of the arsenal by mid-2014; President Obama says that the United States is “prepared to act” if the deal fails.

September 16, 2013: A report by UN weapons inspectors finds “clear and convincing evidence” that on August 21 surface-to-surface missiles containing the nerve agent sarin were launched from regime-controlled positions on Ein Tarma, Moadamiyah, and Zamalka in the Ghouta area near Damascus.

October 1, 2013: Officials from OPCW arrive in Damascus to monitor the dismantling of Syria’s chemical weapons arsenal.

January 7, 2014: U.N. Office of the High Commissioner for Human Rights announces that it has suspended reporting updates on the Syrian conflict death toll due to difficulties in verifying information sources.

January 21, 2014: Guardian and CNN cite a report by former international war crimes prosecutors accusing the regime of the “systematic killing” of 11,000 detainees; report says evidence suggests regime is guilty of crimes against humanity.

February 4, 2014: U.S. Director of National Intelligence James Clapper says that Bashar Al-Assad has strengthened his hold on power; warns of “perpetual stalemate where neither the regime nor the opposition can prevail.”

February 10-15, 2014: A second round of Geneva II talks is held; representatives of government and opposition fail to agree on agenda; Joint Special Envoy Lakhdar Brahimi apologizes to the Syrian people for lack of progress in the talks.

February 22, 2014: UN Security Council unanimously adopts UNSC Resolution 2139 calling on the Syrian regime and the rebels to cease attacks on civilians and allow the delivery of humanitarian aid; calls for an end to “all forms of violence” and condemns Al Qaeda-related terrorism. 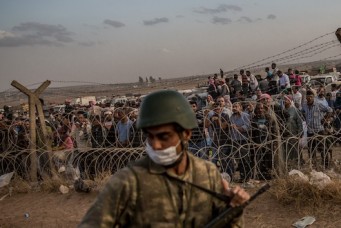 Russia, Palmyra, and the Syrian Kaleidoscope