Since the release of the result of parliamentary elections, all of the attention has been on Egypt’s Islamist parties, especially the Muslim Brotherhood’s Freedom and Justice Party (FJP) and the Salafial-Nour Party, which gained the majority of seats in Egypt’s People’s Assembly. Nevertheless, the presence of non-Islamist, or secular [1], parties is important in assessing Egypt’s new parliament especially with regards to their potential as a counterweight to the Islamists.

Who are these parties?

The non-Islamists in Egypt’s new parliament are a rare breed. Final official results show that Islamist parties won approximately seventy percent of the seats in the incoming People’s Assembly with 216 going to the Muslim Brotherhood’s Freedom and Justice Party, 125 going to the Islamist Alliance mostly dominated by the Salafi al-Nour Party and other Salafi parties, and 9 going to the moderate Islamist al-Wasat which split from the Brotherhood. This leaves thirty percent of the People’s Assembly seats for non-Islamist parties who come in many stripes.

The largest non-Islamist party in the parliament is al-Wafd which has 41 seats, followed by theEgyptian Social Democratic Party with 16 seats, and the liberal Free Egyptians Party with 15 seats, both of which campaigned with the al-Tagammu’ Party as part of the Egypt Bloc alliance. (The Egypt Bloc just announced its dissolution). Additionally, the Revolution Continues Alliance won ten seats, which went primarily to leftist and youth groups, and the centrist al-Adl Party won two seats. The Arab Egyptian Union Party, a secular party which advocates a confederation with Sudan, is represented with one seat, while the old Nasserite Party also won one seat. Finally, the socialist al-Karama Party of Hamdeen Sabahi, and the new al-Hadara Party, which are members of the FJP-led Democratic Alliance, won six and two seats respectively.

Another major portion of the non-Islamists in the new parliament are affiliated with new offshoots of the National Democratic Party (NDP) like the National Party of Egypt, the Freedom Party, the Egyptian Citizen Party, and the Union Party. Final results show that these felool, or remnants of theNDP, won approximately 15 seats in the incoming parliament. Felool however exist in parties other than NDP offshoots, particularly in al-Wafd and the Reform and Development Party of Anwar Esmat Sadat, which won ten seats, as well as within the independents.

Where did they do best?

In terms of the individual member district races, non-Islamists did best in the Cairo suburbs of Nasr City and Heliopolis, which are liberal strongholds, as well as in certain districts in Sohag and Kafr al-Sheikh, which were swept by felool and al-Wafd.

Not surprisingly, non-Islamists performed poorly in Alexandria. Not a single non-Islamist won a single seat in the member-district races in the entire governorate, and Egypt Bloc and Revolution Continues alliances both won one seat respectively out of a total 16 seats for the proportional representation list races.  Moreover, in Fayoum and Marsa Matruh, non-Islamists did not win a single seat in the individual member district races or through the proportional representation lists in the either governorate.

[1] Non-Islamist parties in Egypt would dispute the name secular, but they would also dispute the name non-Islamists. In fact, all major non-Islamist parties have affirmed their belief in Islam being the state religion and source of legislation, and all call for a relationship between Islam and the state. These parties prefer to be called “civil” parties  and believe in a civil state which respects all religions and respects the freedom to practice or not practice religion, positions which would be termed “secular” in the West. Hence, our choice of the terms secular or non-Islamists. Note also that the FJP also calls itself a civil party and supports the concept of a civil state.

The Carnegie Endowment for International Peace is a private, nonprofit organization dedicated to advancing cooperation between nations and promoting active international engagement by the United States. Founded in 1910, its work is nonpartisan and dedicated to achieving practical results. 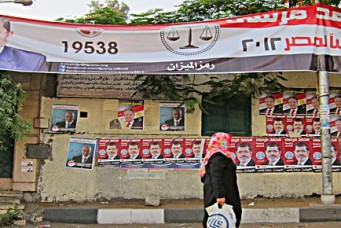 Salafis and Sufis in Egypt