Two important developments this week suggest a possible shift in the Palestinian people’s strategy of dealing with Israel and its harsh policies against them, including occupation, colonization, land expropriation, mass imprisonment and repeated attacks that result in deaths and injuries. These are:
• the Palestinian government’s filing of papers at the International Criminal Court (ICC) in the Hague to have the court initiate a formal investigation of allegations that Israel has committed war crimes against the Palestinians, and
• the imminent launch of a ship full of humanitarian aid that aims to break the Israeli sea blockage of Gaza.

We have no idea whether either of these events will result in tangible gains for the Palestinians in their century-long struggle with Zionism and the State of Israel. Previous attempts to break the siege of Gaza or to use existing international legal and political mechanisms to hold Israel accountable for its actions have not achieved any tangible results. One reason for this is the split of the Palestinian national leadership into two wings headed by Fateh and Hamas. The Palestinian bodies that engage with the world also have seen themselves emasculated into a small group of people around Palestinian National Authority (PNA) President Mahmoud Abbas, who is badly isolated from the mainstream of Palestinian sentiments.

Efforts by non-governmental groups, including the Gaza flotilla and the Boycott, Divestment and Sanctions (BDS) movement, have generated some traction and support globally, but without significant measurable impact yet on Israeli decision-making and policies. This mirrors the condition of exile and dispersal that the Palestinians suffer, yet it is also a result of political dysfunction at a national level which dates back to the last twenty years or so, when the PNA effectively replaced the much more widely representative Palestine Liberation Organization (PLO). Regaining the national unity and coordinated strategy and purpose that the PLO once embodied must be the number one priority of the Palestinian people today.

The two initiatives this week may well point the way towards a more effective path of political and diplomatic struggle that could overcome the constraints now suffered due to Palestinian fragmentation. One aspect of this is the use of non-violent action to achieve one’s legitimate goals. Another is to mobilize global pubic opinion and political support for political action in the service of a just and lasting Arab-Israeli peace.

The Freedom Flotilla III trip of the vessel Marianne of Gothenburg is a symbolic action, but a meaningful one also. Like the previous vessels that challenged the Israeli blockade of Gaza, the Marianne of Gothenburg is important in several ways. It affirms the determination of Palestinians not to acquiesce in their inhuman siege by Israel, and to challenge it repeatedly and peacefully, while others in Gaza use armed resistance against Israel. It shows the considerable international support that exists for the rights of the Palestinians to live a normal life in their own land. It maintains pressure on Israel and its supporters to find a better way to come to terms with the Palestinian will to live in freedom and dignity than by perpetual war and siege.

These and other dimensions of the Palestinian struggle against Zionism can only achieve meaningful impact if they combine with official actions by the Palestinian leadership in established international forums, like the UN and the ICC. Now that the PNA has formally asked the ICC to explore if there is enough evidence to investigate Israeli war crimes in Gaza and also in the other occupied territories, the obvious next step is to coordinate these efforts more closely.

At the same time, the Palestinians must act more maturely and effectively by harnessing the considerable support they enjoy around the world, both with governments and among public opinion. Non-violent protests and legal challenges are the perfect vehicles for generating great international support, which can then be channeled into practical diplomatic or bilateral political moves that assist the Palestinians and constrain the Israeli occupation and siege policies.

Significantly, the papers that the PNA handed to the ICC this week include information about both the war in Gaza last year and Israel’s occupation of the West Bank and East Jerusalem, including information about the issue of Palestinian prisoners. This could prompt a serious international assessment of Israel’s routine colonization and subjugation policies in the occupied territories, which could only support Palestinian claims.

The Palestinian move at the ICC follows the announcement earlier last week that a UN Commission of Inquiry had gathered “credible allegations” that Israelis and Palestinians had committed war crimes during the Gaza war. The Palestinians and Israelis can only benefit if their actions are subjected to the scrutiny of international law, and if that same body of law is applied equitably to ensure the security, sovereignty and national dignity of both parties. 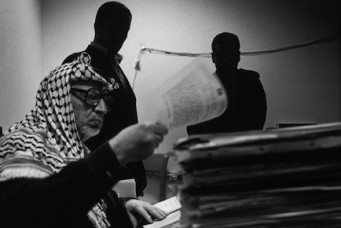 Strengths and Weaknesses in the Palestinian Initiative