Over the past few years, Morocco’s economic integration with Sub-Saharan Africa has accelerated. Between 2008 and 2016, Moroccan exports to the rest of the continent grew an average of 9 percent every year, while foreign direct investment (FDI) rose by 4.4 percent. In particular, Senegal, Mauritania, Côte d’Ivoire, and Nigeria have emerged as the biggest African buyers of Moroccan products, which ranged from foodstuffs to machinery and chemical goods. Unsurprisingly, in this time the trade balance between Rabat and West Africa recorded a net surplus for Morocco. This was partly compensated by a strong influx of Moroccan FDI into the region, mainly concentrated in banking, insurance, manufacturing, and telecommunications.

This reorientation toward Africa is the outcome of a long process in which Morocco has reassessed the benefits and losses of its previous priority on pursuing trade and investment ties with the European Union and United States. Initially this approach helped Morocco build a domestic manufacturing base. Its long-term impact was mixed. First, the integration of former Soviet bloc states in the European Union meant that many companies outsourced or delocalized their production to these new members, instead of Morocco. Second, the end of the Multi-Fiber Agreement in 2004 exposed the Moroccan textile industry to competition from low-cost producers in Southeast Asia. As a result, Rabat’s vertical trade and investment integration with its much bigger economic partners ended up highlighting the country’s weaknesses and led to what some economists identified as a process of premature deindustrialization. With its relatively higher labor costs, lower human capital levels, poorer infrastructure quality, and lower state capacity, Morocco struggled to compete with Asian and Eastern European economies. Morocco’s trade, tourism, remittances and FDI further suffered after the beginning of the Eurozone crisis in 2007 because of the country’s dependence on Southern Europe’s struggling economies.

In response, Morocco has started to look at other markets and partners for growth. Moroccan authorities want to reduce their dependence on Europe and diversify into emerging markets where their firms can benefit from being relatively competitive. While Moroccan firms cannot compete with European and U.S. firms, they are on a much stronger footing when faced with many Sub-Saharan companies, for example. In addition, the difficult international access to Sub-Saharan markets gives Moroccan firms greater opportunities to pursue economies of scale. Most importantly, Morocco’s long-term goal is to become a trade and production hub that can interface between European, American, and Sub-Saharan African trading blocs.

It is therefore unsurprising that, for example, in November 2017 Morocco began negotiations with the South American trading bloc Mercosur to establish a free trade area between them, hoping to become a corridor for Europe and the United States to export goods and services. Thanks to its Tangiers cargo port facilities and its geographical position, the authorities believe that international firms will find it increasingly convenient to locate at least part of their operations in the country. Becoming a logistics hub would help Morocco build up its service industry for transportation, shipping, and banking. Moreover, Morocco hopes international firms will see it as a cheap manufacturing hub from where they can export goods everywhere in the world with few or no tariffs. For instance, a U.S. firm exporting to Senegal faces a set of protectionist tariffs, but if it moves at least part of its production to Morocco these tariffs would all but disappear.

Yet although Sub-Saharan Africa is a natural target for economic expansion—due to its geographical proximity, its vast economic potential, and its growing demand for goods and investment—Morocco has faced some difficulty establishing trade relations there. Morocco formally applied to join the Economic Community of West African States (ECOWAS) on February 24, 2017. At the time, Rabat thought that this application was going to be a relatively smooth process, thanks to Morocco’s excellent diplomatic relations with all ECOWAS members and their preexisting trade and investment ties. The membership request also came on the heels of Morocco’s successful return to the African Union on January 30, 2017, which Rabat saw as a great diplomatic victory.

Yet Morocco’s bid has faced strong objections from West African civil society organizations and economic interest groups. In Nigeria, for example, a large coalition of trade unions, industrialists and NGOs lobbied the government against opening its borders to Moroccan goods, which they saw as a potentially lethal threat to domestic production. And in Senegal, the private sector has expressed its reservations about Morocco, whose higher productivity could undermine the country’s manufacturing base.

This mobilization has so far managed to stall Morocco’s application despite Morocco’s relentless lobbying efforts. For example, the General Confederation of Moroccan Enterprises (CGEM) announced in early March that it planned to meet with its counterparts in the biggest ECOWAS economies. In December 2017, ECOWAS indefinitely postponed a final decision on this matter after publishing an impact report that analyzed the political, security, and economic effects of Morocco joining the group. Under pressure from their domestic constituencies and from Morocco’s lobbying efforts, the Nigerian and Senegalese governments seem unable to solve this apparently impossible equation.

Regardless of whether Morocco’s bid to join ECOWAS will be approved, Rabat’s application indicates it has purposefully avoided addressing the full implications of joining. ECOWAS imposes a common external tariff on its members of between 5 and 35 percent, which is supposed to protect the West African economies from international competition and to promote regional trade. However, Morocco has had an Association Agreement establishing a free trade area between Morocco and the EU since 2000, as well as a Free Trade Agreement with the United States since 2004. Not only will Morocco be unable, by definition, to comply with both the ECOWAS tariff and the free trade agreement, agreeing to the tariff would also run counter to Morocco’s goal of becoming a global hub for production, logistics, and trade.

Further questions surround Morocco’s willingness to join ECOWAS’ proposed common currency. Eight of the fifteen ECOWAS members already share a currency, the West African CFA Franc, and ECOWAS plans to introduce a currency called the Eco for the remaining members by 2020 and eventually merge the two. In January, the Moroccan government widened the trading band for the Moroccan dirham, part of a series of reforms recommended by the International Monetary Fund (IMF) to introduce more exchange rate flexibility. As this policy aims to reassure investors and to make its economy more resilient to external shocks, this indicates that the authorities are not interested in adopting a common currency or even merely pegging the exchange rate to the CFA Franc. Morocco, which likely wants to join the bloc but opt out of the currency, has purposefully avoided addressing this issue, knowing that stating its position would only reinforce opposition to its application.

As for West African citizens, there has been so far no debate in Morocco about the desirability of potentially opening the borders to new Sub-Saharan migrants or whether this could be a potential “price” to pay for accessing the ECOWAS market. Indeed, as ECOWAS citizens can move freely within this area, this could potentially have an impact on Morocco’s ability to absorb economic migrants attracted to the country’s relatively higher salaries—and likely influence Moroccans’ perceptions regarding these migrants’ impact on the high unemployment rate.

The impression is therefore that Morocco is purposefully avoiding giving any firm answer to these questions so it can expand its room to maneuver and obtain an ad hoc ECOWAS membership at the expense of the other states.

Morocco’s Engagement with the Sahel Community 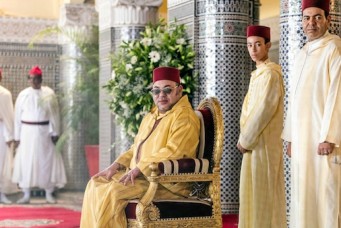 Illusions of Change in Morocco