It is useful to recognize that there is not a single United States in action in the Middle East, but several different versions of this powerful country. I have come to recognize this fact a bit more clearly during an extended stay this month at the University of Denver, with its impressive roster of scholars and practitioners-turned-scholars, along with discussions with Middle East experts in New York, Washington, D.C., Los Angeles, and Boston.

The United States in its foreign policy in the Middle East often acts like a brutish imperialist, shooting and bombing to its heart’s content without caring much for the consequences on the ground. At other times it acts like a bumbling fool who is totally out of his depth and has no idea what to do in terms of calibrating political, economic and military policy, and stumbles from one crisis to another, most notably in Syria and Yemen. The United States also sometimes acts like a learned and realistic lawyer, diagnosing existing conflicts, and treating them with carefully focused interventions and negotiations based on the rule of law and equal rights for all concerned, which ends up producing a healthy situation, as in the Iranian negotiations.

At times the United States allows itself to be badly manipulated by others to the point where it tramples on its own values and principles; this is most evident in the case of Israel and Palestine, where Washington’s incompetent mediation over a quarter century is coupled with atrocious acquiescence in Israel’s death machine and colonization spree against the Palestinians. This America is also evident in its long record of supporting Arab dictators and autocrats.

There is another United States, though, which is now making its presence felt in some quarters of the country, but especially in Washington, D.C., and this is the country that functions with the mentality of an engineer. By this I mean that when the United States perceives a situation of crisis or deep problems and dysfunctions, as it does in the Middle East today, it uses the engineer’s approach of gathering facts, understanding the underlying situation, pinpointing the problems, and applying appropriate technical solutions.

I know of at least two major efforts underway by leading think tanks in Washington, D.C., the Atlantic Council and the Carnegie Endowment for International Peace, that employ the engineer’s best approach to dealing with the world. These two respected organizations have launched major projects to probe deep into the problems that plague the Middle East and that make U.S.-Middle Eastern relations so challenging and complex.

I know many of the smart, able and sincere individuals working on these and other projects that will certainly come to light, and I expect some fine pieces of analysis to emerge from their work. But I have also learned something important over the past forty-five years of watching and interacting with Washington, D.C. analysts and political personalities who deal with the Middle East, especially the Arab World. That is simply that the fine analysis and research that Americans in their engineering mode carry out about the Middle East are often rendered totally irrelevant and useless, because of one major flaw. It is that Americans, especially officials or former officials, generally refuse to factor into their analysis of the Arab World or of U.S.-Mideast relations how American foreign policies can negatively impact these conditions and relationships they seek to understand, and ultimately improve. They refuse to acknowledge any American responsibility for Middle Eastern conditions, however much or little that responsibility may be.

If the terrible situations across the Middle East perplex and discomfort the United States to the point where serious American institutions have launched major, multi-year research projects to find solutions to these ailments, I hope that the people involved will muster the personal courage, political honesty, and intellectual integrity required to do a really complete and useful job. If they cannot, or do not wish to, explore the consequences of continuing American support for Arab dictators and autocrats, or the impact of America’s broadly unquestioning support for Israel, or the direct and indirect consequences of the Anglo-American war in Iraq and continuing American militarism; if these issues are off the table, then the United States is not acting like the engineer whose work typifies the finest in the American tradition. Rather, it would be acting like the snake oil salesmen and quack doctors who are equally part of American life and tradition.

If these issues, on the other hand, are discussed honestly and with integrity, then we can all hope for a great leap forward in American policies in the region, and in American relations with the many societies and people in our countries. We will find out in the year ahead whether top thinkers and analysts in the United States are as good as we think they are, and the criterion in this case of their studies of the Middle East will simply be the issue of their honesty. 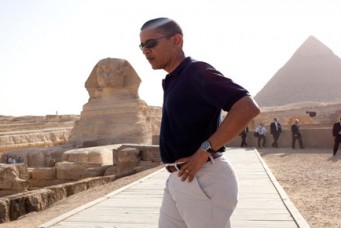