The total restriction of voices opposed to the constitution has negated the credibility of Egypt’s recent referendum vote, making it impossible to discuss it as “free and fair” in any serious way. I am referring here to electoral integrity in a broad sense—defined not by polling procedures, ballot secrecy, and vote tallies, but rather by the larger processes and the atmosphere surrounding the vote. To begin with, funds from unknown sources were injected into the campaign supporting the “yes” vote, as state and private media were mobilized towards the same end. On top of this, many of those campaigning against the constitution were arrested, and anyone tempted by the very idea of voting “no” was intimidated to the point of being labeled a traitor. The same applied to those who called for boycotting the vote—some of whom were detained on no other charge than just that: “calling for a boycott of the referendum.” As both a personal decision and a political choice, boycotting is a perfectly legitimate course of action. But the law governing political rights still includes a penalty for not voting, which the authorities brandish like a weapon when it suits their interests.

Many Egyptians danced with joy at the referendum, which made for a pretty diversion. But electoral integrity and freedom cannot be measured by a few dances in front of polling stations. Unfortunately, we are now facing a set of dangerous precedents—and a political climate that, once established, will be difficult to undo. The referendum process is not a chapter that has been closed; on the contrary, it will be the model for confirming the legitimacy of the upcoming presidential, parliamentary, and local elections. The pattern it sets will not be broken unless political forces, and all those interested in democracy and freedoms, take a firm stance in the face of this steady march towards autocracy. The way power is being exercised does not bode well for what is to come. If opponents of the constitution were made examples of and detained on trumped up charges, one can only imagine what might happen to those who oppose General Abdel Fatah Al-Sisi and his supporters, should he decide to run for president.

I expect that a primary concern of anyone interested in democracy would be a level playing field for electoral candidates. But the referendum was the least promising sign yet (aside from the ongoing systematic repression) that there will be even the least measure of fair competition in the upcoming elections. If political forces are truly interested in taking the democratic route, they must do their part. This includes proposing suggestions about how to regulate the role of the media, financial capital, and the strong arm of the security apparatus. And it means preparing for a fight to reclaim spaces of freedom that are eroding with alarming speed. I appeal to them with the hope that we have not abandoned our state of alert for one of complacency. Were that to happen, we would be forced to concentrate our efforts not on countering repression with resistance—but on establishing that autocracy is a negative thing at all.

Reem Saad is an anthropology professor at the American University in Cairo.

This article was originally published in Al-Shorouk and is translated from the Arabic by Anny Gaul.

Questions for Egypt’s Next Vote

Legitimizing an Underdemocratic Process in Egypt

An Anticlimatic Referendum in Egypt 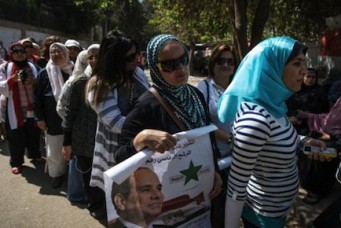