On July 3, Coptic Pope Tawadros II appeared at a news conference alongside Egypt’s political and religious figures, including Al-Azhar Sheikh Ahmed Al-Tayeb and Salafi leaders. He spoke briefly in support of President Muhamad Morsi’s ouster. It was the first time a Coptic pope had addressed Egyptians at an explicitly political forum, live on national television. Almost immediately, aggrieved Muslim Brotherhood supporters singled out Copts, along with the military and the old regime, as a driving force behind Morsi’s removal. In the days that followed, the pope received numerous death threats and has been mostly out of sight ever since. Meanwhile, the church has issued several official statements in support of the current military regime.

Just months earlier, the pope had called for the separation of religion and politics. Was the change of tone a reflection of widespread political sentiment within Egypt’s Christian community? On June 30, myriad Copts joined millions of Muslims to protest what they viewed as a repressive Islamist regime. Their grievances ran deep. Many felt that the 2012 Constitution, which was mostly authored by Islamists, provided little room for religious equality. Over the past year, violence against Christians has risen steadily, and the majority of Copts saw few signs that Morsi’s government would protect them. In April, when unidentified thugs attacked the Coptic Cathedral in Cairo, Morsi’s government failed to defend Christians or condemn the violence. Contributing to these anxieties, anti-Coptic discourse had increased in recent months. Islamist preachers like Asim Abd Al-Magid accused “crusader” Copts of seeking to eradicate Islam from Egypt. He warned that if Christians participated in the June 30 demonstrations, there would be repercussions.

These ominous warnings have become a reality. After Morsi’s ouster, angry mobs took to the streets of Dalga, near Minya, about 150 miles south of Cairo. The multi-day rampage resulted in at least eight injuries and the burning of Christian homes and shops. Hundreds stormed a local church, accusing Copts of treason, and looting just about everything before torching the building. A few weeks later, epithets such as “Die Nazarene Dogs,” “Islamiyya,” (“Islamic state”) and “Down with [Armed Forces Chairman] Sissi and Tawadros” were spray-painted on several Christian properties. Anti-Christian violence and hate speech had become prevalent since the ouster of Mubarak’s regime in 2011, but the new political climate provoked a more visible fury. Attacks were especially rampant in Upper Egypt, where Copts constitute a disproportionately large part of the population. Places like Minya, Bani Suef, Assyut, and Sohag are traditional strongholds for militant Islamists and a hotbed of sectarian tensions.

Those encouraging violence against Copts played on familiar historical notions: if Christians became too haughty, prosperous, or influential, the Islamic order would be threatened. Coptic participation in anti-Brotherhood demonstrations was likely perceived as such a violation.

The events of August 14, when the military dispersed Muslim Brotherhood sit-ins, invited more retaliation against Christians. Over the next few days, at least 42 Orthodox, Catholic, and Protestant churches were assailed, many of them looted and then completely demolished. Mobs destroyed several Christian convents, monasteries, orphanages, schools, homes, and shops; at least four Christians were killed in sectarian-related attacks.

Even as the community has generally backed the military’s use of force against the Muslim Brotherhood, the recent violence against Christians has exposed emerging fissures. At afflicted churches, leaders and laymen were shocked that the government—this time the military-led regime—did little to protect Christians and their properties. Others considered the attacks a necessary sacrifice for a more secure Egypt. Bishop Musa, overseer of the Bishopric of Youth Affairs, issued a statement saying that the Church felt consoled with the military’s pronouncement that it would rebuild religious properties. As a few Brotherhood spokesmen condemned the attacks on churches, some observers suggested that Brotherhood members should stand with and protect churches. In today’s vitriolic climate, such bold action would challenge the hardening narrative that the Brothers support and provoke anti-Christian violence.

At the July 3 news conference, the pope may have felt a critical need to represent the Copts’ political interests on the national stage. But clerical involvement in politics delegitimizes the community’s historical demand for a secular government that recognizes Christians and Muslims as equal. Any long-term solution that can secure civil liberties for all Egyptians requires a major reevaluation of citizenship.

Even though Egyptians flirted with secular notions of citizenship in the nineteenth and twentieth centuries, cultural and legal constructions of who is Egyptian have been persistently based on confessional lines, elevating the parochial concerns of one faction instead of fostering collective interests. Celebrated symbols of national unity—like the crescent alongside the cross—have preserved religious markers as the epitome of patriotism. Looking forward, new alliances must be forged beyond religious lines, among civil groups that can engage in genuine dialogue and conflict resolution. Serious public discussions must take place about a new constitution that would safeguard individual freedoms, human rights, and the equality of all, regardless of what president or party is in power.

Still, there is little evidence to suggest that Christians’ future would be protected under a military-led regime. The Maspero massacre against Christians in October 2011, for example, was an atrocity committed under the Armed Forces’ watch. Twenty-eight demonstrators, defending their right to protest and demanding government accountability for anti-Christian violence, were killed outside of Egyptian State Television’s headquarters. Most of the aggrieved families never received justice for their losses. The same can be said of the families of those killed at Alexandria’s Two Saints Church on January 1, 2011. Under Mubarak’s and Morsi’s rule, sectarian violence was carried out with impunity. The interim military-backed government must take responsibility for protecting Christians. Meanwhile, Copts should also reiterate their historical demands for a just, pluralistic, and representative government, one that would secure their rights and those of their compatriots. Coptic Christians in Egypt need political leaders now.

Febe Armanios is an associate professor in the History department at Middlebury College. She is the author of Coptic Christianity in Ottoman Egypt. Her current research examines the rise of Christian satellite television in the Middle East. 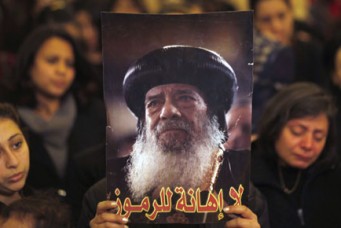 Riddle of Sectarian Problems in Egypt