Saudi Arabia is often criticized for stifling artistic expression. Due to pressure from ultra-conservative religious authorities, for example, commercial cinemas have not operated inside the kingdom since the 1980s. A full-blown renaissance is nowhere in sight; still, buds of a cultural blossoming are becoming more and more visible. Saudi Arabia made its first-ever submission of a film for an Oscar at the 86th Academy Awards in Hollywood. Wadjda, which was submitted in the Best Foreign Film category, failed to earn a nomination, but it made history as the first feature movie to be filmed entirely in the country.

Wadjda tells the story of a 10-year-old Saudi girl’s wish for a bicycle. The film, directed by Haifaa Al-Mansour, a 1997 graduate in comparative literature from the American University in Cairo, delivers a subtle though powerful critique, one that questions the cultural restrictions placed on women in the private and public spheres. “I wanted to make a product that was really Saudi, told by the people, for the people,” Al-Mansour explains.

To succeed, Al-Mansour deftly negotiated a system that throws up formidable barriers to artists and especially those of the feminine gender. Just getting the movie produced challenged societal norms. With no market for local films, she faced difficulty in securing financing. Many questioned the film’s commercial prospects, partly given that it boasted no famous Arab actors and put a child in the lead role. Due to laws limiting a woman’s movement around the country without a male chaperone, Al-Mansour, with the aid of a screen monitor and a walkie-talkie, directed the street scenes in Riyadh from inside a parked van. Al-Mansour eventually finished the film, and even managed to have it screened inside the kingdom—at various foreign embassies and cultural centers.

Al-Mansour is not alone in fighting to expand the cultural space. Across Saudi Arabia, more and more galleries and art venues are popping up. The Saudi Art Council launched an annual event called 21,39—named for the longitudinal and latitudinal position of Jeddah. It hosts workshops and lectures, in addition to putting on exhibitions. The Saudi Art Council seems intent on showcasing a country that is not defined solely by its oil and politics. For example, a recent show called “Moallaqat” (translated as “The Hanging Poems”) presents the work of twenty artists inspired by masterpieces of pre-Islamic Arabic poetry. 21,39’s stated aim is “to build bridges with the outside world through the universal language of art.”

In 2011, another Jeddah gallery held an exhibition entitled Out of Line, which presented a series of photography-based images by Saudi artist Jowhara Al-Saud. Her work consisted of photographs she had taken of people, with their faces then etched out of the prints. It was a provocative challenge to the practice of Saudi censors of blackening out images in printed materials deemed offensive.

Saudi Arabia, says Al-Mansour, cannot shut out the rest of the world; the Internet, she argues, is changing the flow of information and, in the process, altering society. For her part, in the making of Wadjda, she was eager to show Saudi faces to a film-going public. “I wasn’t trying to challenge stereotypes, but rather tell the story of my life, away from everything else that surrounds Saudi, and focus on the people,” she says. “It’s important to put a human face to the culture.” 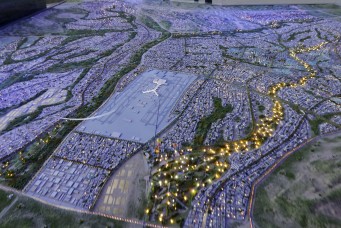 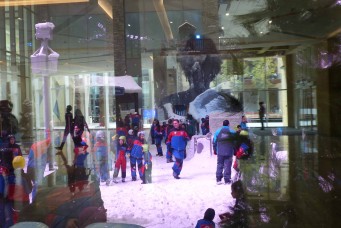