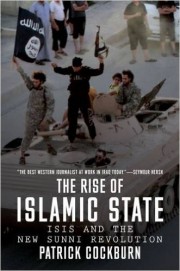 Journalist Patrick Cockburn’s first-hand observations and reported conversations with fighters on the ground in Syria and Iraq lend much credibility to his coverage of events in those two countries. In The Rise of Islamic State: ISIS and the New Sunni Revolution, he provides valuable insights into the complex political scene that surrounds the fighting on the ground. His description of the killing fields in both countries as a strange mélange of fighters from around the region and the world, further complicated by the interventions, funding, and training of Western and Arab intelligence organizations, is quite compelling.

Cockburn covers a wide and complex web of issues connected to the Arab uprisings of 2011 and the emergence of the Islamic State in Iraq and Syria (ISIS). The core concept of the book, however, is embedded in the title and points to the growth of Sunni anger against their corrupt governments as a major cause of the rise and expansion of ISIS. This anger, combined with pervasive Wahhabi values, offered ISIS at least an ambivalent reception if not an outright welcome mat in Sunni communities in Syria and Iraq.

Cockburn’s assertion that the rise of ISIS has changed the history of Iraq, Syria, and the region is overly dramatic, however. He declares the post-2003 Iraqi experiment in democracy dead in the water, based on “the battle lines between Kurd, Sunni, and Shia being too stark and embittered.” He also dooms the internal and international boundaries as having changed irrevocably. While the author is correct to point to the current fluidity of the Syria-Iraq border and to the strength and cohesiveness of the Kurdish areas relative to the Sunni and Shia districts, those may all be temporary trends given the continuing chaos in Syria and ascendance of ISIS across northeastern Syria and northwestern Iraq. Cockburn, at the time of writing, did not anticipate Sunnis, Shias, and Kurds collaborating against ISIS as well as they did. He perhaps underestimated the historic staying power of the Sykes-Picot borders, having established hard realities on the ground despite the artificial nature of their genesis. ISIS may indeed be the most startling phenomenon of the twenty-first century in the Arab World, but one sells the uprisings of 2011 short if one limits their results to the rise of extremist Islam and ironically also underestimates the staying power of old regimes, especially those in the Gulf.

The book is disappointing when it makes some sweeping generalizations unsupported by evidence or logic. Cockburn’s overall derision of the youth who started the Arab uprisings in 2010 and 2011—accusing them of being politically naïve yet clever in “manipulating Western media”—seems devoid of research on the youth groups, their role in the uprisings, or their own assessments of how and what transpired. The young political activists who confronted authoritarianism across the region and succeeded in ousting four longtime dictators could not have anticipated all the tribal, militant, and extremist forces that would be unleashed in the process. After all, none of the academic or intelligence analysts looking at the region in 2010 correctly predicted the 2011 uprisings and their aftermath. Cockburn accuses the young activists of the uprisings of having misled Western media by exaggerating old regime atrocities and playing up their own successes against them. The dearth of in-depth analysis, however, is surely the fault of professional analysts and Western media and not that of activists risking their lives to send out images and news while under fire in the region, from Syria to Yemen and North Africa.

The author’s argument that there are too many players with conflicting goals in Syria for the crisis to be amenable to one fix-it-all peace plan, is apt. Cockburn makes the case that the Syrian opposition was “under the thumb of the regional powers.” To buttress the claim, he quotes a fighter who defected from the Free Syria Army (FSA) to ISIS describing the presence of Saudi, Qatari, and Jordanian intelligence agents and officials at FSA meetings in Ankara.  That is hardly newsworthy in itself or discrediting of the FSA, which openly asked for foreign help from the start of the armed conflict. Given the uneven playing field in the beginning, and the direct intervention of Iranian and Hezbollah advisors and fighters later on, regional involvement on the side of the opposition is understandable.

The author is quite right in depicting the sorry state of the Iraqi armed forces, attributing the way in which they abandoned Mosul and Kirkuk to ISIS in 2014 to their lack of loyalty, training, and professionalism. He is correct in blaming the inflated numbers of soldiers on the corruption of officers and government officials alike. That corruption, along with the neglect and abuse of the Sunni opposition in Iraq, has now become former Prime Minister Nouri Al-Maliki’s legacy. Cockburn, however, is unfair to Maliki’s successor, Haider Al-Abadi, in concluding that Al-Abadi’s failure to fill the position of defense minister in his first six weeks in office—something Al-Maliki was either unable or unwilling to do in as many years—was a telling sign of failures to come. Al-Abadi did eventually get the Iraqi parliament to agree on a Sunni defense minister and a Shia minister of interior after two months in office. Al-Abadi, though moving very slowly on reforms, was nonetheless in his first year as prime minister miles ahead of where Al-Maliki ever was in gaining the confidence of the Sunni community. He made more progress forging a workable arrangement for Sunni tribes to work alongside Kurds and Shia militias in taking the fight to ISIS fighters holding out in Tikrit, Mosul, and Anbar.

Cockburn takes on the controversial question of an ideological symbiosis between ISIS and Al-Qaeda on one hand and the Wahhabi religious tradition in Saudi Arabia on the other. The roots of extremism found in Saudi Arabia as well as in Pakistan are indeed worthy of further study. Ideological affinities, however, do not prove active collaboration between the governments of these two countries and the organizations listed as terrorist groups by both of them. In saying that the global war on terror is failing because it is not “targeting the jihadi movement as a whole . . . and because it is not being aimed at Saudi Arabia and Pakistan,” the author begs the question of what exactly he is recommending as a policy option. A dramatic declaration like that cannot be left hanging without fuller justification and explication. There is certainly awareness in U.S. government circles that some Saudi clerics preach an unhealthy Salafi doctrine and some even support the actions of extremists in the region. Awareness of the problem, however, does not in itself suggest what to do about it. Saudi Arabia and Pakistan, two longtime allies of the United States, have a strong history of collaboration in the fight against terrorist organizations (albeit with shortcomings and gaps). What would Cockburn have Washington do? Condemn these states publicly, press them to eradicate the Wahhabi and Salafi cultures outright, or simply disown them and take them off the list of friends and allies and turn them into adversaries and pariahs?

Finally, and perhaps most surprisingly, Cockburn concludes that the United States and the West may have no option but to “militarily assist” the Bashar Al-Assad regime if there is to be hope in defeating the Islamists. Yet, if the Islamists are so strong, why does Cockburn believe the Al-Assad regime can still defeat them after four years of failing to do just that? While it is true that the demise of Al-Assad would, at least in the short run, empower the Islamists, a victory for the regime would further empower and embolden Iran and Lebanese Hezbollah—itself an unpleasant prospect for the West.

One of the most interesting observations in the book is the author’s analogy between the current wars in the Middle East and the Thirty Years’ War in Europe. The analogy is well worth further contemplation and elaboration, given the complexity of forces now competing for power in the region and the time it is likely to take before all the social, economic, and religious conflicts are resolved.

Will We Attack Our Own Dysfunctions as We Battle Islamic State?

Islamic State In Syria, Back With A Vengeance

The Islamic State’s Strategy In Libya