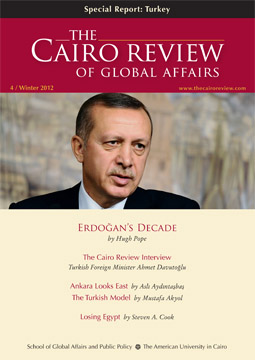 By Steven A. Cook

Washington’s policy of ‘authoritarian stability’ worked for thirty years in the Middle East. Strategic relations with Hosni Mubarak helped enable the U.S. to become the predominant power in the region. But domestic opposition groups used these ties as a cudgel in their struggle against dictatorship. With the fall of Mubarak, future U.S. cooperation with Egypt must overcome a legacy of mistrust.

Prime Minister Recep Tayyip Erdoğan has changed the political face of Turkey, with significant results to show for it—a booming domestic economy and enhanced international prestige. The jury is still out on whether he has the political will to address shortcomings on Kurdish rights, the Armenian genocide question, the future of Cyprus, and the rule of law, and thus elevate Turkey into a truly global player.

In the past eighty years, Turkish society has not become as secularized as Mustafa Kemal Atatürk envisioned. But rather than choosing a radical or violent path, Turkey’s Islamists have become champions of democracy. This is a lesson in how to be modern and Muslim at the same time.

After the collapse of the Ottoman Empire, the Turkish Republic oriented itself toward Europe to catch up with ‘contemporary civilization.’ But in the last ten years, Turkey has sought to play a more active role in the Middle East. The dramatic policy shift now stands to yield substantial strategic, political, and economic dividends following the Arab Spring.

Turkey’s Justice and Development Party has targeted education reform as a priority—to stimulate economic growth as well as to promote conservative Islamic values. But, so far, the party has not cut loose from the authoritarian Republican legacy within the education system as much Turks had expected.

Turkish Foreign Minister Ahmet Davutoğlu impresses the world with his grasp of geopolitical theory and zest for putting it into practice. During an in-depth exchange with the Cairo Review, he discusses the direction of the Arab revolts, Turkey’s future in Europe, the “golden age” of U.S.-Turkish relations, and much more.

Little over a year ago, no political analyst I know would have argued that the leaders of Tunisia, Libya, Egypt, and Yemen would be deposed in the immediate future. This set of leaders, cumulatively, had been in office for more than 100 years. Nor would anyone have projected that there would be uprisings in Bahrain and Syria. Clearly, 2011 was the Year of Revolution in the Arab World.

Mohamed Messara seems enveloped by calm, which is surprising given his occupation. The year 2011 was a very dangerous one for photojournalists. Revolutions present opportunities for dramatic pictures, but the risks for conflict photographers like Messara are immense. Five journalists died in the uprising in Libya, and twenty have been killed elsewhere covering the Arab Spring.

Happenings, speakers and events at the American University in Cairo in Winter 2012.

The Guerilla Cartoonist of Rio

Carlos Latuff has penned some of the most acerbic political cartoons of the Egyptian revolution. One of them shows a shoe hurtling toward Hosni Mubarak, such use of footwear being one of the gravest personal insults in Arab culture. Another iconic image portrays Egypt’s longtime ruler as a diminutive figure, dangled from his collar by Khalid Said, the young Egyptian whose death in police custody fueled the January 25 uprising. Latuff’s cartoons are ubiquitous in Egypt, adorning everything from blog sites and Tahrir Square t-shirts to the front pages of Cairo dailies. Yet, the cartoonist is not an Egyptian, but slings his ink-tipped arrows from a studio in far away Brazil, his native country.

Eugene Rogan is an American, but when he arrived in Cairo recently, to present a talk at the Cairo Opera House and appear on a panel at the American University in Cairo, he was in some way coming home. The son of a military contractor, he spent much of his childhood in the Middle East–initially in Lebanon, where he witnessed the reverberations of the 1973 Arab-Israeli War and the outbreak of the Lebanese Civil War; and later in Egypt, at the time of the bread riots and Anwar Sadat’s dramatic visit to Israel. Rogan, a lecturer at Oxford University, returned to Egypt for the launch of the Arabic translation of his acclaimed book, The Arabs: A History.

Examining how migration enriches our world.

Reflecting on the recklessness behind the global economic crisis