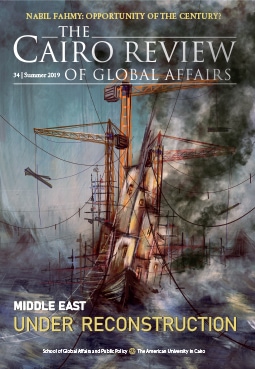 Welcome to the Second Industrial Revolution!

Sister of the Rebels

Meet the sister of the rebels.

Jared Kushner’s economic stimulus initiative to solve the Palestinian issue was introduced in the 80s and ended in failure.

In reaffirming the U.S. role in the Middle East, anti-terrorism expert Gerald Feierstein explains that it is not enough to just fight violent networks; leaders must also address the root causes of extremism

A Disaster of the Political Class

While Brexit is above all a calamity of the Conservative Party’s making, it is born of entrenched xenophobia and racism in British society.

A Man for All Ages

A Man for All Ages

A Disaster of the Political Class

While Brexit is above all a calamity of the Conservative Party’s making, it is born of entrenched xenophobia and racism in British society.

When the Shooting Stops

For Syria, and the rest of the world, the era of liberal peacebuilding has passed. But there are other ways to make peace, which call for a return to basics and a new kind of “software”

While maintaining the status quo for the time being might seem the easiest option, it is also the worst possible one

Reconstruction in Iraq cannot be achieved without universal reconciliation, economic and education reform, and equitable application of the rule of law

As a possible peace and removal of American troops appears imminent, how do Afghanistan’s Turkic neighbors view the regional security situation?

Prioritizing Peace Ahead of Economic Growth

Afghanistan’s economic fate is intricately tied to its post-conflict peace plan, which is currently in the making

Reconstruction is never easy, and in Yemen the road will be longer than most. The first step is to pass on “best practice” in favor of a critical, reflexive approach

With living conditions in the Palestinian enclave fast approaching breaking point, anything short of a comprehensive approach to peacebuilding and reconstruction will not work

End of War, but Not of Conflict

State (re)building in war-torn countries can only happen in a conducive political process on all levels ranging from the local to the international, which is exactly what seems lacking in MENA

Forward… But Where to?

The end of Bouteflika, the centrality of General Ahmed Gaïd Salah, and the parameters of change in Algeria