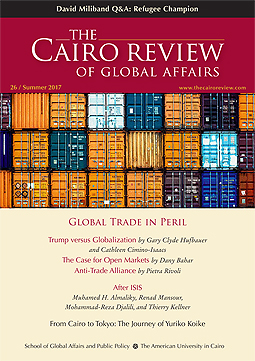 Happenings, speakers, and events at the American University in Cairo in Summer 2017.

A university initiative attempts to engage AUC with its surrounding community.

From Cairo to Tokyo

Tokyo Governor Yuriko Koike recalls her time as a student in Cairo and how it influenced her life in politics.

Former British Foreign Secretary David Miliband quit Parliament to take up the helm of the International Rescue Committee. He speaks to Cairo Review Senior Editor Amir-Hussein Radjy about the biggest refugee crisis since World War II and the personal family story that drives his work.

The country’s ruling establishment, guardians of the 1979 Islamic revolution, confront a changing society.

A “National Action Plan” to combat terrorism is incomplete without the state confronting its own history of supporting radical Islamism.

Can cities succeed when nations fail in the fight against global warming?

As a presidential candidate, Donald Trump campaigned on promises that would reverse years of trade liberalization. Whether or not he triggers a global trade war, his policies are undermining America’s standing as the preeminent world leader.

Is the free trade party over? Competition certainly has its losers. But the widespread discontent with globalization misses a crucial point: only more trade, not less, will reverse the slowdown in world productivity.

Who’s afraid of globalization? Everybody from Donald Trump to Bernie Sanders, it seems, and environmentalists and factory workers in between. An unlikely coalition of skeptics from across the political spectrum is driving the anti-trade movement.

China has unveiled a “win-win” policy paper to guide its approach to the Middle East. Its $1 trillion One Belt One Road infrastructure initiative will extend all the way to North Africa. But can trade buy Beijing political clout in the region?

Expansion of Israeli settlements, restriction on access to water, and land confiscation are displacing Palestinians from agricultural livelihoods they have known for centuries. But olive tree growers and backyard gardeners are refusing to surrender their heritage. This is a story of farmers under occupation.

Is There Hope for Iraq?

Defeat of the Islamic State in Iraq and Syria will offer Baghdad a fresh state-building opportunity to correct the mistakes following the ouster of the Saddam Hussein regime in 2003. As Sunnis, Shiites, and Kurds pursue their own interests, a serious effort toward communal understanding is the key to progress.

Rise of the Militiamen

The end of the strongman era in Iraq has led to the rise of paramilitaries representing sects and ethnicities. Popular Mobilization Units have become part of the state’s official security structure. Although the PMUs have been instrumental in the fight against ISIS, their more powerful militias pose a stark challenge to the country’s future stability.

By Mohammad-Reza Djalili and Thierry Kellner

Iran’s support for the Al-Assad regime in Damascus has long provided it with a foothold in Lebanon, Palestine, and the rest of the region. But with its deepening role in the Syrian civil war, Tehran is losing hearts and minds in the Arab World.

Fury in the Philippines

When President Rodrigo Duterte unleashed a deadly war on drug traffickers, criticism by the Obama administration highlighted growing tensions in the century-old U.S.-Philippine alliance. Will Duterte’s budding friendship with a new American president head off Manila’s tilt to China?