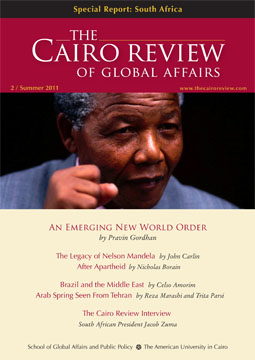 William B. Quandt on the Peace Process: “At a dead end”

Despite the intense focus on the uprisings across the Middle East, the Israeli-Palestinian conflict continues to command diplomatic attention. Later this month, the United Nations General Assembly is slated to vote on Palestinian statehood. William B. Quandt, author of Peace Process: American Diplomacy and the Arab–Israeli Conflict Since 1967, spoke to the Cairo Review on the outlook for progress.

The geopolitical contest for the region’s hearts and minds.

Governing a World with HIV and Aids

The pandemic is not out of the danger zone, but apocalyptic predictions about the collapse of armies, state crises, and a vicious interaction between HIV/AIDS and violent conflict — especially in Africa — have not come to pass. Careful analysis gives far less cause for pessimism than many imagined would be possible even half a decade ago.

President Luiz Inácio Lula da Silvaa made the region a foreign policy focus in pursuit of greater South-South cooperation. An insider’s look at how the Brasília sees Arab democratization, Arab-Israeli peace, the nuclear standoff with Iran and trade and investment promotion.

The results of the United Nations Climate Change Conference in Cancun proved once again that nations are not serious about addressing the danger posed by global warming. Non-stop consultations between developed and developing countries must achieve tangible and effective compromises before the follow-up conference in Durban in November.

The big-power competition in Central Asia is not quite what it seems. More intriguing is how the region’s governments play the U.S., China and Russia off one another for political and economic gain.

South Africa’s liberation leader taught us a vital lesson when he navigated a peaceful end to apartheid: it is possible to be a great politician and a great human being at the same time. In reaching out to his old enemy, he bequeathed his nation the rule of law, freedom of speech, and free and fair elections.

How the rise of developing economies–exemplified by BRICS– is changing the old way of doing business.

President Jacob Zuma presides over a country that after decades of international isolation under white minority rule is taking an increasing role in African and global affairs.

Women in the Middle East and North Africa region (MENA) are making appreciable strides in social development. They now outnumber men attending universities in most Arab countries. Disparities in literacy and enrollment in primary and secondary education have fallen dramatically in the last few decades. The impact of these changes can be seen in the labor market as well. As a result of better educational opportunities and growing economies, employment for women has been rising at a faster rate than for men.

By Lauren E. Bohn and Madeline B. Welsh

Vendors in Tahrir Square have been doing a brisk business selling T-shirts of various colorful designs that usually have “January 25” emblazoned on the front. Certainly the first day of the Egyptian revolution, when tens of thousands initially gathered in Cairo’s central square, was a milestone. Now, with the television cameras largely gone and souvenir stands taking over, the revolution might appear to be over. Egyptians know better, perhaps none more than Hossam El-Hamalawy.

By Mohamed A. El-Erian

Egypt, led by Egyptians, is today at a very special juncture. Egyptians have a remarkable opportunity to shape a new and better destiny for their country. And the rare combination of both willingness and ability comes wrapped in a new sense of purpose, energy and engagement on the direction of the country.

Happenings, speakers, and events at the American University in Cairo from Summer 2011

The struggle for wealth and power in the new South Africa

Reflecting on reporting in Israel and Palestine