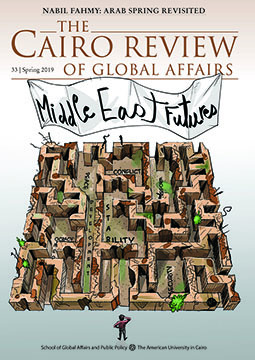 From Algeria to Sudan, the time for good governance is now

Could land be Egypt’s Dutch Disease?

For scholar and diplomat Daniel Levy, this much is clear: until Israel loses its sense of impunity, the peace process goes nowhere

Getting Back on Keel

Egypt’s first Fulbright specialist from the United States since 2013 Thomas De Luca critiques the past and the future of national exceptionalism, political polarization, and erosion of democratic values both at home and abroad

The recent Israeli election showed Bibi to be the king of Israel and a master of the status quo.

On the final frontier, Beijing is bringing its A game. Can other Asian powers such as India compete?

Historians should not look for the roots of Israeli state policies and Palestinian oppression in the events of 1967, but in colonial practices leading up to 1948

Drivers, scenarios, and strategic choices for an improved Arab World

Extreme instability has prompted a fundamental reconfiguration of the contemporary Middle East; as the old order crumbles, a new one has yet to emerge

The Return of Geopolitics

In the post-Arab Spring Middle East, the forces of geopolitics and geo-economics are shaping the region and potentially point to a more cooperative future

Erdoğan’s Failure on the Nile

A Win-Win for Iran and the Region

Swamped in a Triple Crisis

Following the 2017–18 uprising, Iran is sick, stuck in three endemic crises with a foreign policy unlikely to alleviate what ails it

Rule of the Rigid Compromiser

By Cheng Li, and Diana Liang

President Xi Jinping’s populist leadership of China, six years on, has been a lesson in the art of mixing strict policies with flexibility—alongside the ultimate goal of growing his own power and that of China

Following Benjamin Netanyahu’s reelection Israel is a land of contradictions, democratic and wealthy yet with dangerous demographic divisions

Can the Kurds, the largest ethnicity in the Middle East without their own nation, overcome their internal disunity and find ways to exist as an independent state or as autonomous regions?