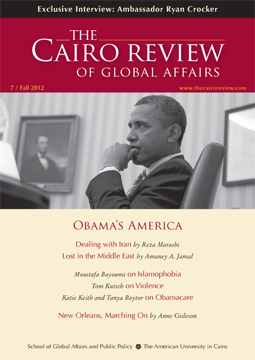 Cairo was dark when U.S. Representative Patricia Schroeder stepped off the plane in Egypt. Very dark. It was the beginning of the 1973 Middle East war, Israeli forces had reached Kilometer 101, and the capital was under a blackout.

By Madeline B. Welsh and Stephen Kalin

Dispense with the notion that archives are endless rows of cabinets where bespectacled historians pour over dusty, yellowed records.

Two hours beforehand, a crowd was already pressing the gate outside Ewart Hall on the Tahrir Square campus of the American University in Cairo. When American linguist and author Noam Chomsky arrived on stage, the packed audience of twelve hundred rose in a thunderous standing ovation.

The wake from a larger vessel rocked the felucca, a traditional Egyptian sailboat, heaving it against the pontoon it was docked beside. As water entered the hull, the two Americans aboard pictured their mission of personal diplomacy sinking along with their second-hand boat.

I had the good fortune to work with a man of great skill and quality of character who was an exemplary diplomat: Medhat Haroun, American University in Cairo’s provost, who passed away on October 18.

Ambassador Ryan Crocker spent a four-decade diplomatic career in the Islamic World, serving as U.S. envoy in Kabul, Baghdad, Islamabad, Damascus, Kuwait City, and Beirut and receiving honors such as the Presidential Medal of Freedom. He speaks with Managing Editor Scott MacLeod about America’s wars in Iraq and Afghanistan, handling the crises over Syria and Iran, and Washington’s foreign policy failings.

Twilight of the Elites

The crisis of values in the land of opportunity.

Syria: The Fall of the House of Assad

Examining the rise and fall of Bashar Al-Assad.

Islamophobia and the Politics of Empire

Pondering the problem of Orientalism in Washington.

That Used to Be Us

How can the U.S. can catch up with China?

Addresses by President Barack Obama on the Middle East

President Barack Obama entered office in 2009 calling for a new approach to diplomacy with Iran. Yet, as he begins his second term, the U.S. and Iran are on the brink of a conflict that could engulf the world. A Memo to the President on how America can avoid war.

Lost in the Middle East

By Amaney A. Jamal

Washington’s response to the Arab Spring is to bolster secularists as a bulwark against the rise of Islamists. But the policy undermines the struggle for democracy. For a sounder approach, America should develop policies that address the sentiments and grievances of the man on the street.

For much of the U.S., the September 11 attacks transformed Muslim Americans from an invisible minority to a shadowy people to be feared. During the Obama presidency, civil rights conditions for the community have gone from bad to worse. The popular climate has become uglier. Something has changed in America.

In the film The Dark Knight Rises, Batman once again saves Gotham City from ruin but at the ostensible cost of the superhero’s own life. It is a parable that explores fear and anxiety in the Age of Terror and forces Americans to confront truths about the violence in their land.

By Katie Keith and Tanya Baytor

The Affordable Care Act of 2010 was a milestone in the long fight for health care reform in the U.S. But despite President Obama’s reelection, it is far from clear whether it will deliver on its promise. A close examination of the question of implementation.

Still Mightier Than the Sword

The demise of the American newspaper seemed to be the death knell for an All-American tradition: the editorial cartoon. But a spirited new generation of cartoonists is taking its irreverence online. Rest assured: the Republic remains in safe hands!

From Katrina to Isaac, hurricanes have brought death and destruction. Two years ago came another calamity: the BP Deepwater Horizon Disaster. Adding insult to injury, citizens no longer have a daily newspaper to inform on their troubles. The story of how a great American city wrangles the void.